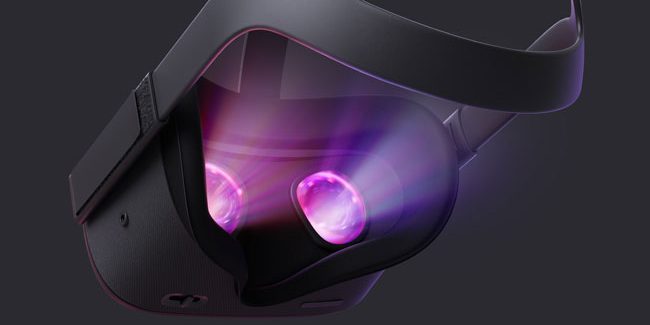 Oculus is reportedly working on the next iteration of its standalone Oculus Quest headset, which is expected to feature a smaller form-factor that is lighter and has a faster refresh rate than the current standalone model, as well as redesigned controllers, according to a new report from Bloomberg.

The new report suggests that Oculus intended to launch its new Quest headset later this year, but due to delays in both development and manufacturing caused by the global coronavirus pandemic, it may be delayed until 2021.

While the Oculus Quest has received much praise as an all-in-one VR experience, one common criticism is that it tends to be front-heavy, weighing in at 1.25 lbs (571g), due to all the computing hardware components and battery built into the headset. As a result, the report claims that the new Quest could be 20% lighter at 1 lb (roughly 450g), as well as range between 10% to 15% smaller, making the headset a much more comfortable experience for the user.

Additionally, sources familiar with the matter noted that the next Quest would have a faster refresh rate of at least 90Hz, up from the current model’s 72hz, and the company is even testing out displays that are capable of supporting up to 120Hz. However, it’s likely to be capped at 90hz to preserve battery life.

The company is also said to be replacing the fabric on the sides of the Quest with plastic similar to the Rift S, as well as making the strap material to be more elastic than the rubber and velcro currently used. Other changes include a mechanical IPD for adjusting the distance between the user’s pupils and a pair of newly designed controllers that are more comfortable and fixes the issue with the existing controller, which tends to have the battery cover sliding off during intense use. The redesigned controllers will be compatible with both the current and new models of the Quest.

Like the current Quest, the new standalone headset would feature four external cameras, along with six degrees of freedom, as well as still support the Oculus Link cable, which lets a user connect the headset to a PC for a boost in performance and high-end VR gaming experience.

While the original plan was to launch the new Quest headset sometime around Oculus Connect later this year, it appears that the release date could be extended until 2021 due to due to the impact of the ongoing pandemic.