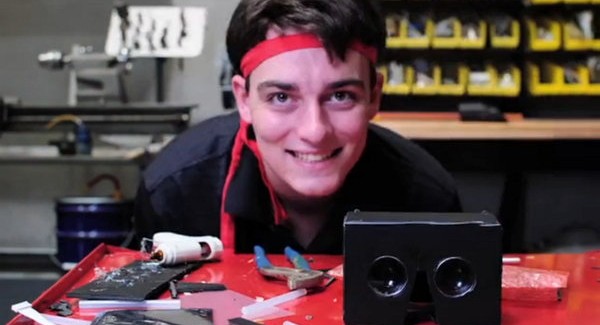 Last month the unexpected announcement of Facebook acquiring Oculus VR for $2 billion sent shock waves throughout the gaming community. Early supporters of the Oculus Rift that initially funded the project on Kickstarter were among the many that expressed their mixed emotions against the deal. The initial fear of having the social network giant squash the vision of the VR future set forth by Palmer Luckey and take the Oculus Rift for their own profitable agenda with virtual worlds full of ads, privacy concerns, and Facebook branding drove Rift fans into a state of fury.

However, during a video interview with Reviewed.com at PAX East 2014, Oculus VR founder Palmer Luckey explained why the Facebook acquisition of Oculus is good for gamers and is the best deal for the long-term success of a virtual reality platform, and not just another passing fad.

According to Luckey, “the games industry is the only industry that’s really well equipped to build interactive immersive 3D worlds,” and Oculus will remain to do the same thing it had intended from the beginning by building a VR headset designed for gaming.

Luckey added, that there are “a lot of good reasons” the Facebook decision was made. And while he understands why the public may have reacted the way they did. Many of them are not looking at the “big picture,” or know what Oculus knows behind the scenes. Luckey goes on to point out that 99% of game developers, he has spoken with are thrilled with the deal. This now “guarantees that they [game developers] are going to have an audience to sell for, and a platform worth developing for.” Luckey passionately conveys that the plan is to “promote the long-term adoption of virtual reality, not short-term financial returns.”

In another video interview with Maximum PC, while clearly showing signs of fatigue from an exhausting day, Luckey takes time to reassure and address several key concerns that were on the mind of gamers and VR enthusiasts:

Luckey also explained how prior to the Facebook deal, the company was “relying a lot on the scraps of the mobile phone industry.” Now, with the huge amount of capital provided by Facebook, not only will the overall production timeline of the Oculus Rift move faster, but this will also allow the team to develop its own custom hardware that can be utilized and optimized to make for a much better VR experience than it could ever do before.

No specific details on finalized specs, official price, or release date of the consumer version of the Oculus Rift were provided. However, it is expected that the consumer version will have some updated specs compared to DK2, and possibly be released before the end of the year, or early 2015. Stay tuned for more updates, on this developing story.