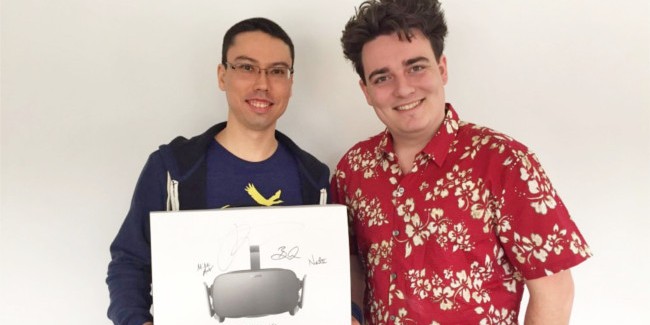 The long-awaited Oculus Rift is set to arrive on consumer’s doorsteps this Monday, March 28th, however, one lucky customer from Anchorage, Alaska received an early surprise visit from Oculus founder Palmer Luckey himself, who personally made the trip to hand-deliver the first consumer Rift headset signed by all of the co-founders.

Ross Martin, a VR enthusiast and software developer, was the very first person to place a pre-order for the Oculus Rift VR headset when it opened to the public in early January.

Luckey captured the momentous occasion in real-time via Facebook live, as he presented Martin with the first consumer Rift and helped him unbox it so he can try the headset on for the first time.

“I’ve been working on this thing for so long, and you’re the first person to actually get one,” Luckey told Martin in the video. “So it’s kind of like me taking all of this work and handing it off to you so you’ve got to make sure you have fun with it or something.”

Martin was thankful to Luckey for taking the time to deliver the Rift and expressed his gratitude to the entire Oculus team. “I think people online really appreciate all the transparency and outreach that you do.”

Speaking to Polygon, Luckey explains that the delivery marked an important milestone for him that stems from years of hard work and dedication that has led to this moment. “I said ‘hey guys, I’ve been working on this since 2009, we’ve been working on Oculus since 2012, I’ll be damned if some random delivery guy is going to get the satisfaction of delivering the first Rift. That’s mine.'” said Luckey.

The first wave of Oculus Rift pre-orders should begin arriving to early consumers and Kickstarter backers this week. However, don’t expect Luckey to be knocking on your door anytime soon.