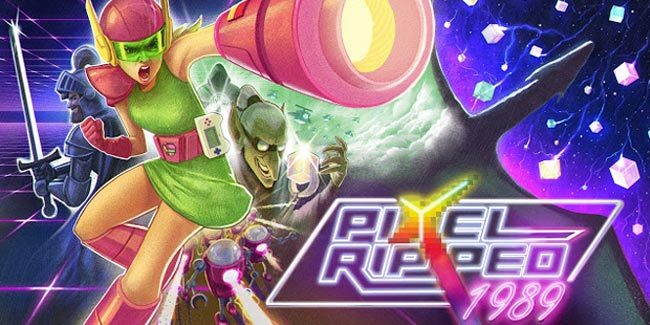 The retro-inspired VR adventure game, Pixel Ripped 1989, has been one of the most long-awaited and highly anticipated indie VR titles in development since the early days of the Oculus DK2 when it was originally just a demo called ‘Pixel Rift’. Now, the game is finally released and available today on the Oculus Store, including all other major VR platforms.

Set in the era of portable 8-bit gaming systems, Pixel Ripped 1989 is described as a “game within a game” where players step into the shoes of a young grade-school student named Nicola, as she tries to secretly play her portable gaming system without getting caught by her overbearing teacher and avoiding other distractions around the school.

In the game, the player will also control and follow the adventures of Dot, an in-game character who sees her world torn apart by an evil villain known as Cyblin Lord, who is seeking to break through the video game realm and into the real world to take over reality. It’s up to Nicola to help guide Dot through her journey and work together to save both worlds from the Cyblin Lord’s villainous attempt at merging the two realities and gaining ultimate total control.

For those unfamiliar, work on Pixel Ripped 1989 first began back in 2014, when Brazilian native developer Ana Ribeiro first came up with the concept for the game, as part of her Master’s degree project while she was still a student studying game design in London. The development of the game has been a long journey for Ribero, but thanks to funding from Oculus and awards from Intel and the AMAZE Indie Festival, as well as nominations to IndieCade and the Proto Award, she has since then joined São Paulo-based ARVORE Immersive Experiences in 2017, where she completed development of the game and was able to see her vision fulfilled with the team there.

Pixel Ripped 1989 is available now to purchase for the Oculus Rift via the Oculus Store—as well as across all other major VR platforms, including HTC Vive, PSVR, and Windows ‘Mixed Reality’ VR headsets.