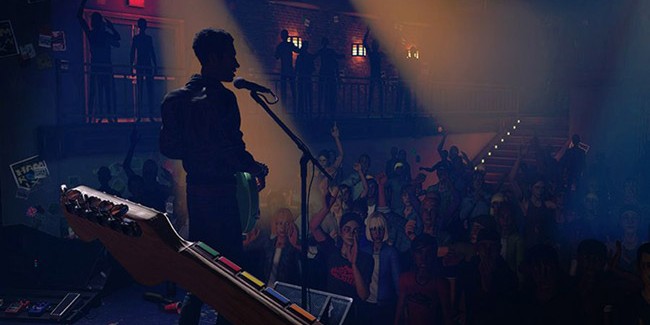 Today, Oculus and Rock Band developer Harmonix announced the much anticipated Rock Band VR is set to make its exclusive debut for the Oculus Rift on March 23rd, with pre-orders for the game available now through Amazon for $69.99.

Rock Band VR comes bundled with a Rock Band Fender Stratocaster wireless guitar controller, as well as a digital copy of the game. The guitar controller is also compatible with the Xbox One or PS4 version of Rock Band 4, depending on the bundle you choose. Keep in mind, that Oculus Rift owners will also need the Oculus Touch motion controllers, which come with an adapter to attach to the head of the guitar in order to track its movement in the game.

There will be 60 songs on the Rock Band VR soundtrack, from “legendary artists and upcoming acts on the verge of breaking out,” including songs like Aerosmith’s “Walk this Way,” The Killers’ “When You Were Young,” and Paramore’s “Ain’t it Fun.”

According to Harmonix, Rock Band VR is a completely new take on the music game genre and is specifically designed from the ground up for VR and Oculus Touch. It’s the ultimate rock ’n’ roll simulation that “offers unprecedented stage presence and uniquely deep, rich and full-featured gameplay” unlike anything else the company has ever created.

Here are some of the features you’ll experience with Rock Band VR:

If you’re seeking out to live out your rock star fantasy and start jamming on an immersive virtual stage in front of screaming fans, then Rock Band VR looks like it will finally give you the chance.