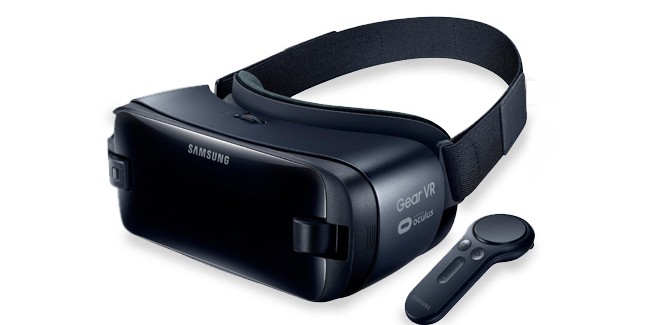 Today at the Mobile World Congress event in Barcelona, Samsung announced a brand-new Gear VR headset, powered by Oculus, and revealed that it will come with a dedicated, motion sensor controller making it easier for Gear VR users to interact with games and experiences.

According to an Oculus blog post, the team at Oculus has been working closely with Samsung in an effort to improve upon their mobile VR platform “with the latest advancements in VR input and interactivity.”

The new Gear VR Controller features a one-handed, ergonomic design with a built-in accelerometer, gyrometer, and magnetic sensors—including a clickable touchpad and integrated home, back, and volume keys. There is also a trigger button that “lets you select, grab, take aim, and fire” for enhanced VR gaming experiences.

In addition, Oculus says more than 70 new titles designed to take advantage of the Gear VR controller are already in development, including support for all existing touchpad apps—which means over 550+ existing Gear VR games and applications will be compatible with the new controller on day one.

The new Gear VR itself appears nearly identical to the previous model introduced alongside the Galaxy Note 7 in late 2016. The new headset features 42mm lenses with a 101-degree FOV (Field of View) as well as advanced distortion correction technology that minimizes motion sickness. It also supports both micro USB and USB Type-C ports with an included converter and is compatible with the Galaxy S7, S7 Edge, Note 5, S6 edge+, S6, and S6 edge.

There’s no word yet on the final release date and price of the new Gear VR with controller, but it’s likely to go on sale around the same time as the Galaxy S8, which is expected to launch in mid-April 2017.