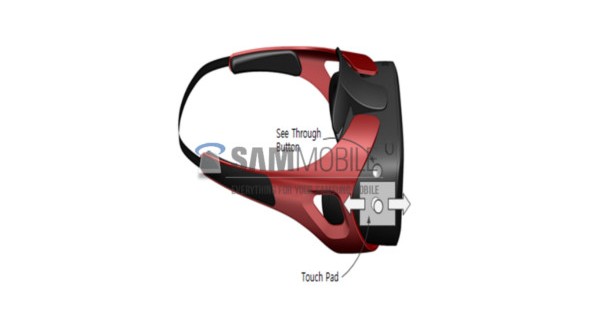 Back in June, rumors surfaced about Oculus VR and Samsung collaborating to develop a virtual reality headset for high-end smartphones. Now a new image of what appears to be a rendered concept design of Samsung’s VR headset gives us a glimpse of what we can expect.

According to Sammobile, Samsung’s virtual reality headset will be called Gear VR and is reported to officially be announced at the IFA 2014 trade show in Berlin, Germany on September 5–10 alongside the Galaxy Note 4.

The actual headset is designed to work together with a Samsung Galaxy mobile device, which attaches into the headset via USB 3.0 — the headset utilizes the smartphones’ display, processor, and built-in motion sensors to deliver an immersive virtual reality experience.

Samsung’s Gear VR will also include added features like a touchpad to navigate the user interface on the device, as well as the ability to use the smartphone’s rear-facing camera sensor, to allow users to switch to a video feed to see the outside world without requiring to remove the headset.

Oculus VR is reportedly helping develop the software (SDK) for Gear VR, which Samsung plans to make available to developers shortly after the announcement. An entire lineup of Samsung apps dedicated for Gear VR is expected to be released, however, initially only apps like Theater, 360 Player, and Gallery will be made available.

No pricing has been confirmed for the Samsung Gear VR, however, since the device is dependent on a smartphone as its essential hardware this should help keep the cost of Samsung’s headset relatively low.