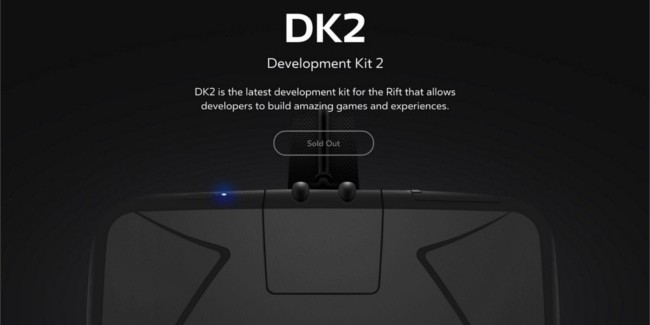 If you’ve recently been tempted to buy an Oculus Rift Development Kit (DK2) to hold you over as you patiently wait for the highly-anticipated consumer version of the Rift to be released early next year, you now have another reason to keep waiting. According to the latest from Oculus, the DK2 is now officially sold out.

The DK2 first debuted in March 2014 at GDC and offered a number of improvements over the first iteration of the Rift (DK1)—including improved resolution, faster refresh rate, and better positional tracking capabilities. The DK2 set the industry standard for VR content development with over 118,000 dev kits sold worldwide as of July this year.

While the option to order DK2 directly from Oculus is no longer available, anyone that wants to get their hands on an Oculus Rift DK2 can still find one through various online auctions, like eBay. However, keep in mind that Oculus will not provide any warranty on second-hand sales of its development kit.

With the Oculus Rift DK2 officially off the market, we are now one step closer towards focusing attention on the launch of the Oculus Rift consumer version (CV1) in Q1 of 2016. No specific price for the Oculus CV1 has been announced yet, however, reports suggest the headset will roughly be over $350. Stay tuned for more information, as new updates are revealed.