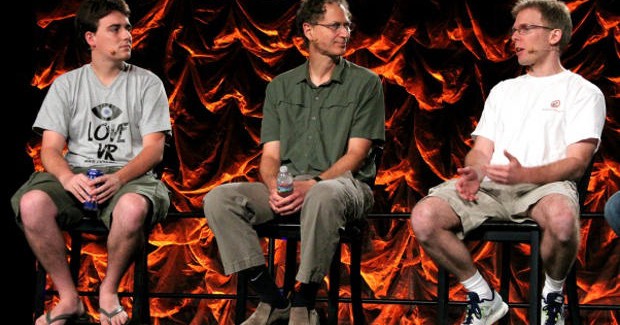 Looks like the Oculus “Dream Team” of talent continues to grow its impressive roaster—following the recent Facebook acquisition of Oculus VR for $2 billion.

Today, it was announced that former Valve developer Michael Abrash, a well-respected veteran in the gaming industry—known for his early work at Microsoft, and id Software has joined Oculus as its new Chief Scientist.

The news comes less than a month after former Valve engineer colleague, Atman Binstock, joined the talent ranks over at Oculus. Abrash also reunites with Oculus CTO, John Carmack, where the two share a long-standing relationship and a history of collaborating on Quake, one of the more influential games over the last decade.

In recent years, Abrash has been working at Valve leading the charge forward into the realm of virtual reality. He gained recognition as one of the top VR experts in the industry, and a strong advocate for the future of virtual reality technology.

According to a blog post on the Oculus VR website, Abrash shares his insight on what the Facebook deal will mean for Oculus and the future of virtual reality. “We’re on the cusp of what I think is not The Next Big Platform, but rather simply The Final Platform—the platform to end all platforms—and the path here has been so improbable that I can only shake my head,” he said.

He refers to the acquisition as, “the final piece of the puzzle” necessary for VR to achieve its ultimate goal. The almost infinite amount of cash in Facebook’s deep pockets, will surely allow Oculus to not compromise on bringing the greatest VR experience possible to the masses.

“Facebook’s acquisition of Oculus means that VR is going to happen in all its glory,” he said. “The resources and long-term commitment that Facebook brings gives Oculus the runway it needs to solve the hard problems of VR – and some of them are hard indeed. I now fully expect to spend the rest of my career pushing VR as far ahead as I can.”

As we enter into this new post Facebook and Oculus partnership, only time will tell if the vision that has been set to achieve will come to fruition. One thing is for sure, Oculus is not hesitating with attracting the right talent to the team. Like a game of chess, all the right pieces are strategically coming together to hopefully deliver on its promise.