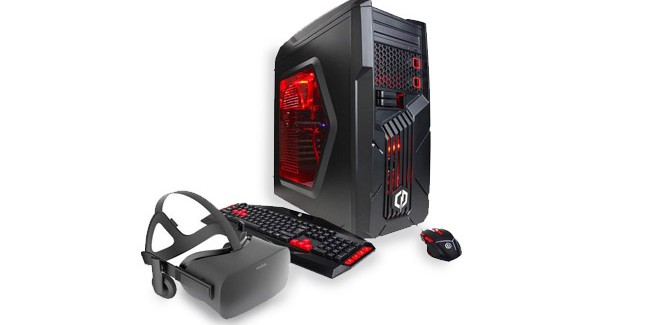 If you’ve been holding off for the right time to find a relatively low-cost PC rig that is capable of handling a high-end VR experience, then your wait is over. CyberPowerPC has officially launched a powerful, yet affordable Oculus Ready VR gaming PC for $499 when bundled with an Oculus Rift headset.

Powered by an AMD quad-core processor and Radeon graphics card, the CyberpowerPC ‘Gamer Ultra VR Desktop’ is designed to significantly lower the barrier of entry for people wanting to get into virtual reality, while still delivering a solid experience and performance on the Oculus Rift.

Here is the breakdown of some of the features of the ‘Gamer Ultra VR Desktop’ specs:

“This bundle will be the first complete AMD Oculus-ready gaming PC that provides the full experience of VR gaming at an affordable price,” said Eric Cheung, CEO of CyberPowerPC.

A big factor for being able to lower the specs compared to what we’ve been previously required to have in order to experience a good virtual reality experience is thanks to a new feature called Asynchronous Spacewarp (ASW), which Oculus first revealed back in October at Oculus Connect 3. This new technology essentially allows the PC to render the frame rate at half the speed of 45 frames per second, while using a synthetically generated image every other frame to display at 90 frames per second, ensuring a smooth VR experience on lower-end hardware.

“Less than a year after launching the Oculus Ready program, we’re thrilled to see that the all-in price for jumping into the highest-quality VR experience continues to drop by hundreds of dollars,” said Nate Mitchell, VP of Product, Oculus. “Thanks to the efforts of hardware companies like CyberPowerPC and AMD, more people will have the opportunity to enjoy the amazing games and experiences coming to Rift this year.”

The Gamer Ultra VR is available at select online retail partners Best Buy and Amazon, however, remember this part of a bundle that includes the Oculus Rift headset, which ultimately brings the total cost to $1,099. The PC separately will actually cost you about $649, so the combo ends up saving about $150. This bundle is ideal for anyone new to VR and looking to get a complete Oculus Ready PC rig with a headset while also saving some extra bucks.