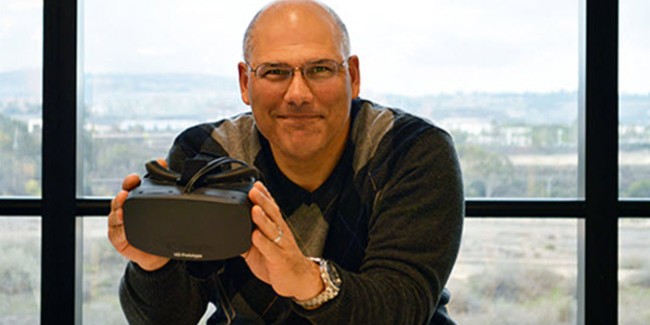 David DeMartini, an industry veteran who spent 15 years at Electronic Arts before joining Oculus VR at the end of 2013 as the head of worldwide publishing, passed away at the age of 56.

The sudden passing of De Martini, known to many as DeMar, was initially reported by Geoff Keighley via Twitter last night. Speaking to Polygon, De Martini’s son Dominic confirmed the news stating that his father died at Stanford Hospital in Palo Alto, CA, following complications during a lung transplant.

DeMartini joined EA in 1998, where he led the development of the company’s major sports franchises such as Tiger Woods PGA Tour and NCAA March Madness. He later oversaw the launch of EA’s Origin platform. In late 2013, DeMartini ended his 15-year tenure at EA to join Oculus VR as the head of worldwide publishing. He stepped down in July 2014, just a few months after Facebook announced it was acquiring the company for $2 billion. After that, he started his own business to become a consultant.

Oculus issued a statement remembering DeMartini as one of its early supporters:

“David DeMartini was an early pioneer at Oculus and we were fortunate to learn from him, to call him a friend and to experience his incredible determination and infectious humor. He will be greatly missed and our thoughts are with his family and friends right now.”

In a statement, a spokesman for EA said, “David DeMartini was an institution here at EA for many years. His trademark wit, passion and warmth shaped every team, game and project he touched. We’ve lost a great one, and our hearts go out to his family, friends and everyone that had the great fortune to know him. DeMar will be truly missed.”

Free Gear VR Bundle Promo is Back for Father’s Day