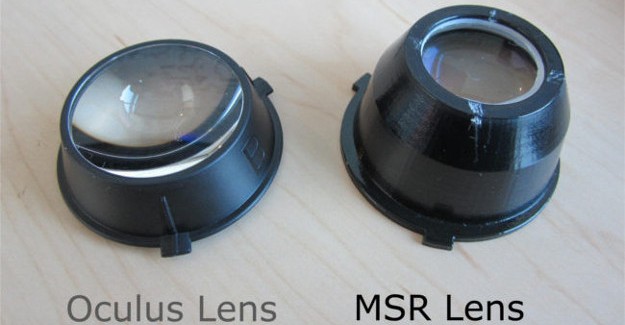 Earlier this month, Oculus VR announced its close partnership with Microsoft and revealed some of the unique benefits both companies will offer in working together on delivering a great VR experience to consumers on top of the Windows platform.

Apparently, Microsoft is taking its support for Oculus one step further with its own attempt to improve the current DK2 headset lens design.

According to Microsoft Research, the group is claiming to have developed a lens system that it believes is significantly better than the one currently used in the Oculus Rift DK2 headset, and is sharing the 3D printable design as a free CAD file for anyone to download and create for themselves—however, Microsoft suggests a high-end, Objet Eden 260 3D printer is necessary to accurately reproduce the exact details of the design.

The field of view on the new lens design is said to be slightly smaller than the current Rift DK2 stock components, but offers an image that “is sharper across the field and has far less chromatic aberration.”

Microsoft Research states you will need to buy lenses that specifically have “visible light (VIS) anti-reflection coating,” which does increase the price of the lens. However, using a lens without the coating element will result in the image contrast appearing “noticeably worse.”

You can expect this do-it-yourself lens project to cost somewhere around $200 per eye. It’s definitely not cheap, which is probably one of the reasons why Oculus did not use a similar pair of lenses for the DK2, in order to keep the cost of the headset relatively low at an affordable price point.

The good news, Oculus promises to feature its own high-quality, custom optics when it ships the consumer version of the Oculus Rift early next year. The new custom optics are intended to be a vast improvement over any lenses previously used in the development kit HMDs.