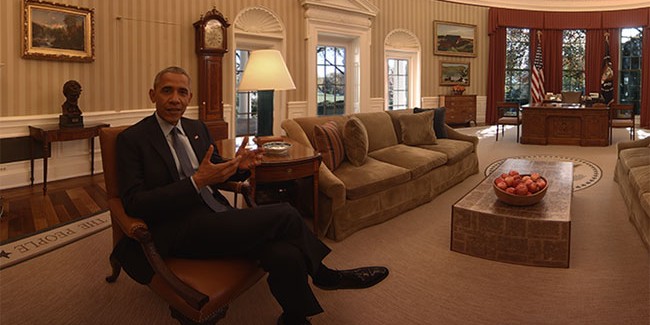 With just a week left before President Barack Obama leaves office, the president and First Lady Michelle Obama are inviting everyone to join them on a personal tour of 1600 Pennsylvania Avenue. And the best part is that you can experience it all from the comfort of your own home.

Today, Oculus and Félix & Paul Studios announced the release of “The People’s House,” a 360-degree guided tour of inside the White House featuring the nation’s president and the first lady.

“At Oculus, we’re passionate about investing in VR experiences that take people where they’ve never dreamed they could go,” says Oculus Head of Experiences Colum Slevin. “With The People’s House, we can bring the public directly into one of the most historic buildings in America, and give everyone a personal tour led by the President and the First Lady.”

The eight-minute video tour highlights nine different areas of the White House, including the Situation Room and the Oval Office. During the tour, viewers will gain historical insight into the iconic building and its grounds, as well as some of the first family’s cherished memories about their time spent living there for the past eight years.

“Michelle and I always joke, we’re just renters here…the owners are the American people and all those invested in creating this amazing place with so much history,” states President Obama in the film. “What we want to do is make sure that everybody felt they had access to it…that as many people as possible could come in and appreciate the place where Lincoln or FDR or Reagan had made decisions that helped to shape America.”

An extended version of the White House tour will also be available soon in stereoscopic 3D, so it will have more depth, and sharpness, as well as offer a much more immersive experience. Until then, you can check out the 360-degree video streaming on Facebook and as an Oculus Video for Rift or Gear VR owners.