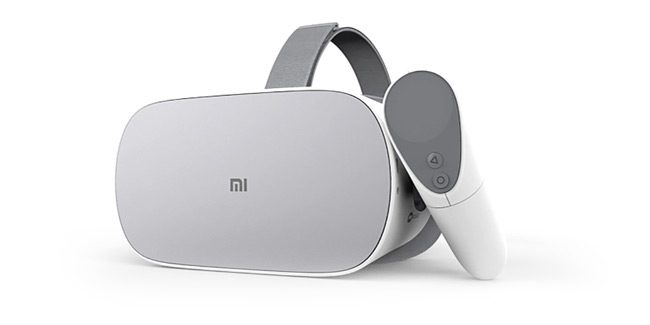 On Thursday, at Xiaomi’s annual launch event in Shenzhen, China, the company announced the launch of its new Mi VR standalone headset developed in collaboration with Oculus and is now available to purchase at a price of ¥1,499 yuan ($235) for the 32GB base model and ¥1,799 yuan ($280) for the 64GB version.

Like the Oculus Go, the Xiaomi VR headset is powered by a Qualcomm Snapdragon 821 SoC, a ‘Fast Switch’ LCD display with a resolution of 2560×1440 (538 PPI) that supports 60Hz and 72Hz refresh rate, with the higher refresh rate helping to reduce latency. The headset features a specially-modulated diffractive optical system, with Oculus’ custom-designed Fresnel lenses and supports 3DoF. It also comes with a single motion controller with 3DoF, integrated spatial audio, as well as a 3.5mm headphone jack. The Xiaomi Mi VR headset is essentially identical to the Oculus Go, aside from the subtle difference in color and the ‘Mi’ logo stamped on the faceplate.

The Mi VR standalone supports both the Mi VR SDK and Oculus Mobile SDK, making it easy for Chinese developers to support the headset and allowing existing Oculus developers to bring their content to the Chinese market on the Mi VR platform. While Oculus Go currently has 1120+ VR applications in the US market, not all those applications will enter the Chinese market right at launch. Oculus developers will need to make sure to translate their content for Chinese consumers before releasing their apps in China. As an added incentive, Xiaomi says it will offer 100% revenue share throughout 2018 to developers who fully localize their content on Mi VR.