Oculus is Extending $399 Summer Sale of Rift and Touch Bundle 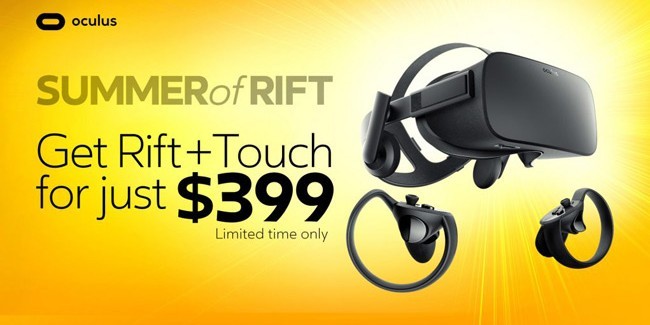 For those still looking to jump into high-end VR, you’re in luck! Oculus confirmed that it is extending its $399 promotional sale of the Oculus Rift and Touch controller bundle for a few more weeks.

This major price cut was originally intended to last only six weeks as part of Oculus’ Summer of Rift sales event, which would have had the deal ending around August 21st. However, due to high consumer demand, the company is offering potential buyers more time to take advantage of this all-in-one package deal before it goes back up to its new permanent price of $499 once the sale ends.

“Due to high demand, and the resulting switch to the all-in-one Rift+Touch package, we’re extending the sale by a few weeks to make sure everyone can take advantage of the Summer of Rift promotion,” an Oculus spokesperson said in a statement. “We’ll definitely notify the community before the sale ends.”

With the Rift+Touch bundle priced at just $399 for a limited-time, this remains a great opportunity for anyone that wants to finally get into virtual reality and experience what high-end VR is all about on the Oculus platform.