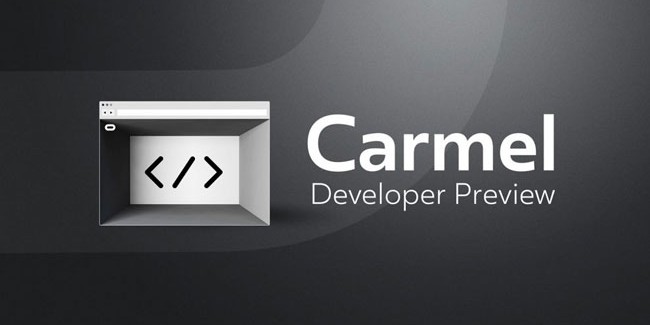 Oculus has announced the release of a developer preview for its upcoming VR browser, codenamed ‘Carmel’. It was first revealed back at Oculus Connect 3 in October, and now you can experience it for yourself and get a glimpse at what’s to come.

Carmel is the first product solution by Oculus specifically designed to bring web content and technologies to the Oculus Rift, as well as other mainstream VR devices. WebVR content can include both immersive 3D scenes built with the WebGL and WebVR APIs, as well as enhanced 2D web experiences running in virtual reality. This is one of the unique benefits of WebVR content in that you’re not just limited to viewing within a VR headset, but also can appropriately run on other devices, like a desktop browser or mobile phone. This is great for VR developers who want to extend their reach to a massive potential audience of users who do not yet own a VR headset.

The Carmel Developer Preview, which is now available as a Gallery app for the Gear VR on the Oculus Store, provides developers with some of the basic tools and the latest WebVR API’s to start building and testing out their own VR content experiences for the web.

Oculus emphasizes that Carmel is still in its early stages of development, so you’ll notice the lack of some common features like an address bar, as well as being unable to currently view existing 2D content. For now, the company is focusing its attention on delivering immersive WebVR-only experiences using Carmel. According to Oculus, as new devices are released over time, the Carmel frameworks will automatically upgrade the content to work well across all browsers and devices, both in and out of virtual reality.

In addition, Oculus released the Carmel Starter Kit where developers can learn and walk through the basic steps of detecting devices, requesting a presentation, and rendering in stereo. You can also view the samples online using a compatible browser.

There are definitely big plans in the works aimed at enabling web content in virtual reality. It’s believed by “most major browser vendors” that the WebVR API configuration could reach general availability in mid-2017. Oculus also notes that its taking steps alongside its partners at Google, Microsoft, and Mozilla to deliver on achieving this “key milestone” for the web.

For more details on Carmel check out the official blog post announcing the Developer Preview release from Oculus.