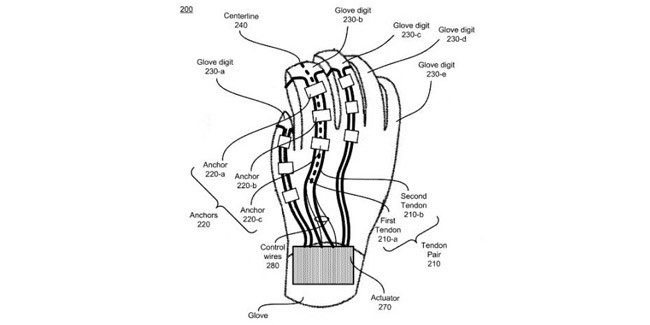 A new pair of Oculus patent applications published last week by the U.S. Patent and Trademark Office (USPTO) shows that Oculus’ haptic VR glove technology is one step closer to becoming reality in the company’s effort to enhance the way we interact and feel the virtual world with our hands.

Last February, Facebook CEO Mark Zuckerberg teased the first glimpse at a pair of Oculus prototype gloves for VR during his visit to the Oculus Research lab in Redmond, Washington. With the recent release of Oculus’ patent applications, we now get a bit more detail on the company’s potential future development of a glove-like peripheral for virtual and augmented reality.

Both Oculus’ patent applications describe the company’s concept and method for achieving haptic feedback with a pair of gloves. The first patent highlights the use of flexible actuated tendons embedded along the top surface of the digits (fingers) of the glove. These tendons are also connected to an actuator, which controls the movement of the glove digit to provide resistance to finger movements and simulate the sense of touching and holding a virtual object.

The other Oculus patent application appears similar to the haptic feedback mechanism that utilizes flexible actuated tendons in the glove, but instead, this one uses multi-layers of flexible composite ribbon that varies in elastic extensibility across the top of the glove’s digits. The composition ribbon also connects to an actuator at the base of the glove to simulate a sense of touch in VR and creates the illusion that a user is interacting with a real object.

There is no word on when Oculus ever plans to release an actual consumer product like this, however, it’s exciting to know that the team is working on finding new and more immersive ways to bring our hands into the virtual world.