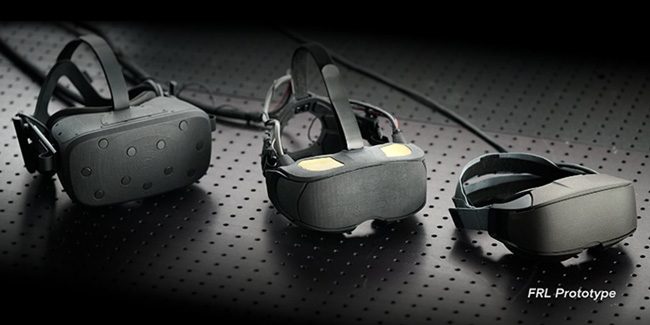 At Oculus Connect 6 (OC6), Facebook Reality Labs Chief Scientist Michael Abrash took to the stage and revealed two new versions of the ‘Half Dome’ prototype the company showed off last year, which uses a varifocal display to automatically adjust points of focus in an image and offers a much wider field of view (FoV) than the current Rift or Quest headsets.

The two new prototype versions of ‘Half Dome’ are referred to simply as ‘Half Dome 2’ and ‘Half Dome 3’. While both aim to deliver a wider field of view and varifocal displays for improved visual immersion, they also are a significant step forward in regards to ergonomics and comfort, both visual and physical, than the original ‘Half Dome’ prototype.

The ‘Half Dome 2’ prototype is designed substantially smaller and lighter in form factor, with a reduced weight of 200 grams over its predecessor. While the field of view is narrower than the previous prototype (which had a 140-degree FoV), the company says that is still 20% wider than that of the current Oculus Rift and Quest headsets. The new mechanical varifocal system of ‘Half Dome 2’ uses a voice coil actuator and flexure hinge arrays, which reduces friction, minimizes noise and vibration, as well as improves the durability of the headset’s moving mechanical parts.

As for ‘Half Dome 3’, the improvements to the company’s latest VR prototype appear to be much more significant. While the previous versions of ‘Half Dome’ uses a mechanical varifocal system to move the lens in order to adjust the focus and visual clarity of nearby objects, the ‘Half Dome 3’ relies on an electronic version of the varifocal system that uses a new type of liquid crystal lens “made from a thin, alternating stack of two flat optical elements: polarization-dependent lenses (PDLs) and switchable half-wave plates,” according to the official Oculus blog.

According to Oculus, “[…] By stacking a series of PDLs and switchable half-wave plates on top of each other, we’re able to achieve smooth varifocal that lets you comfortably and seamlessly adjust your focus in the headset.” As a result, the new electronic varifocal system in ‘Half Dome 3’ allows it to be significantly smaller, more reliable, and achieve a better ergonomic form factor than previous prototypes while also eliminating noise and vibrations.

As shown in the image above, the six liquid crystal lenses inside the new electronic varifocal system can rapidly cycle through 64 discrete focus planes (the number of focal planes doubles with each additional lens), allowing for a smooth transition between focal depths as it shifts through different sets of lens states. This enables users to view objects in focus at closer distances and allows the headset to more naturally mimic focus changes in the user’s eyes.

For now, there are no specific details on when we may expect these new prototype innovations and technologies to finally make its ways into next-generation Oculus headsets, but it is clear that the Facebook Reality Labs (FRL) and Oculus team are pushing toward advancing the future of VR hardware and software to the next level.