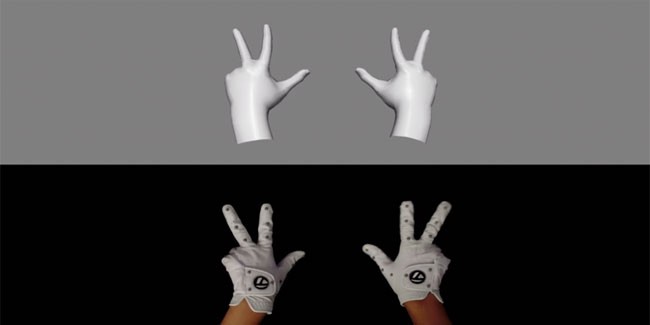 Facebook CEO Mark Zuckerberg back in February teased a glimpse at Oculus’ next-generation hardware with a photo showing a new prototype for glove-like controllers designed to interact in a new way with the virtual world using the Oculus Rift. Now, a video recently posted by Oculus shows the gloves’ precise finger and hand-tracking capabilities.

The video shows off a pair of VR gloves capable of producing natural finger and hand movements with fine precision and accuracy. Oculus Chief Scientist Michael Abrash also showed a video of the gloves in action in a recent blog post, noting the challenge to achieve this level of advanced hand tracking.

The prototype currently requires the use of retroreflective markers in conjunction with multiple numbers of external camera sensors positioned around a user in order to accurately track the hands in a virtual space. Unfortunately, hands have about 25 degrees of freedom and lots of self-occlusion,” said Abrash. “Right now, retroreflector-covered gloves and lots of cameras are needed to get to this level of tracking quality.”

As a result, with its complex setup, the current form of Oculus’ prototype VR gloves is not exactly ideal for consumers at this early stage. However, while there are no specific plans in the works for the company to release any new hardware like this anytime soon, it gives us something to look forward to in the future and is definitely exciting to know that Oculus is continuing its hard work to overcome the many unique challenges in VR to ultimately bring truly immersive hand-presence to the Rift.