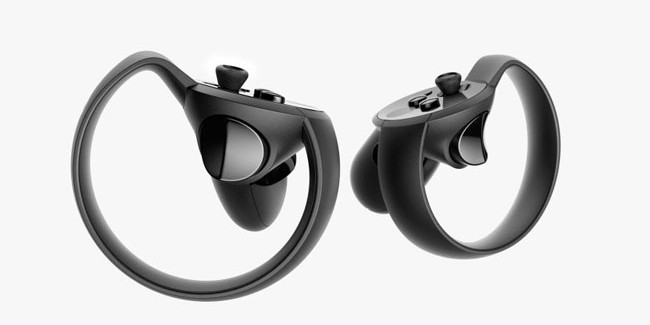 When the Oculus Rift headset came out earlier this year, it proved to be a mind-blowing experience but lacked one major feature—motion controls. Today, that all changes with Oculus finally catching up and delivering a much more immersive experience to Rift owners with the launch of the Oculus Touch.

Up until now, the HTC Vive, undoubtedly the Rift’s biggest rival, has been the only PC-powered VR headset on the market to offer handheld motion-tracking controllers. Now with the launch of the long-awaited Touch controllers, Oculus has the chance to claim VR dominance as the total package—and believe me; it was well worth the wait.

What’s Inside the Box?

For $199, you get two controllers specifically designed for each hand and an additional Oculus sensor, which is identical to the one that comes packaged with the Rift headset. The secondary sensor is necessary to boost the tracking field-of-view and accuracy for both Touch controllers along with the headset. The box also includes two non-rechargeable AA batteries, one for each controller—as well as a connector for the as-yet-unreleased Rock Band VR, which is used to firmly attach the Touch controller to the headstock of a Rock Band guitar.

Much like the Oculus Rift, the process of setting up the Touch controllers is pretty seamless and straightforward. Once you’ve got the secondary sensor plugged in via a USB 3.0 port, you’ll be prompted to put one AA battery into the left and right Touch controllers. The on-screen tutorial then launches to walk you through pairing the Touch controllers with your system by simply holding two buttons on each controller until a white LED starts blinking.

From this point, your controllers will be synced and you’ll run through a quick calibration process to ensure the correct position of your sensors, as well as begin to map out the virtual boundaries of your available play area. The boundary system is a feature Oculus calls ‘Guardian’, which works very similar to HTC’s Chaperone system. It allows you to move around an area safely and will alert you when you’re getting too close to the edges of your defined space. This comes in very helpful to avoid walking into a nearby wall or whacking your hand on your desk when swinging your Touch controllers around the air.

With two sensors set up in front of you, approximately 3-6 feet apart, Oculus recommends a play area of 5 x 7 feet to achieve the “optimal” experience. However, if your space is a tad smaller, don’t worry it should be fine.

Additionally, there’s also an experimental 360-degree tracking option, which allows you to set up your two sensors on opposite corners of the room to prevent controller occlusion, which occurs when your body blocks the line-of-sight from the sensors tracking the Touch controllers and Rift headset. Even though this configuration covers a smaller play area up to 5 x 5 feet, it lets you enjoy a complete 360-degree VR experience without occluding the sensor’s view. However, keep in mind you’ll need to purchase a USB extension so that you can have enough cable to place the secondary sensor behind you.

If you want full room-scale tracking, another experimental option is also available. This option allows you to walk around a larger play area up to 8.2 x 8.2 feet with the use of a third sensor, which is sold separately for $79. For this configuration, you’ll need to place one sensor in the rear and two sensors in the front. This provides you with the largest tracked space possible and offers the least chance of occlusion to occur when moving around 360-degrees.

The Oculus Touch controllers encompass the epitome of a well-thought-out input solution for virtual reality, built from the ground up. Its light-weight and ergonomic design is crafted with the utmost quality that fits naturally into the palm of your hand in such a way that simply melts away, as you immerse yourself into the Rift.

The 7-button layout of the Touch controllers can seem overwhelming at first, but after a few moments of going through the Oculus’ tutorial demo you begin to familiarize yourself with the controller’s various capabilities fairly quickly and its ease of use really starts to shine.

Each controller has a clickable analog stick, two face buttons, and a menu button on the left controller, and an Oculus Home button on the right controller. There are also two triggers, one for your index finger to rest on and one located underneath your middle finger.

The buttons and triggers also feature capacitive touch sensors, which adds a significant benefit to the sense of hand presence you experience in virtual reality. For example, by lifting up your index finger off the trigger button, your virtual finger will point. If you lift up your thumb, you’ll give a thumbs-up gesture. You can even clench your fist or leave your hands in a natural position. While gesture detecting is limited, it’s enough to offer a meaningful and immersive way to interact and communicate with your friends in VR.

With Touch controllers finally in the hands of consumers, Oculus can now begin offering entirely new and more immersive experiences on its platform that take advantage of the controllers’ intuitive motion-tracking capabilities.

There are more than 50 games to play with Touch within the Oculus Home Store, including big exclusive titles like The Unspoken and Dead & Buried and the highly-promising SUPERHOT VR. There are also multi-platform hits like Arizona Sunshine, I Expect You to Die, Space Pirate Trainer, and Job Simulator. In addition, many Steam VR titles that were built for Vive will work on the Oculus Rift with Touch, which is great news for anyone who’s been on the fence about which VR platform they prefer to purchase.

Furthermore, Touch expands the landscape of creative and artistic applications on the Rift platform. Quill and Medium are two Touch standouts developed in-house by Oculus Studios. Medium lets you “sculpt” anything in digital clay, while Quill is a powerful VR illustration tool built to allow users to draw and paint in virtual reality. Both apps are available for free to all Touch owners.

Absolutely, positively, no question the Oculus Touch is a must-have for anyone who owns an Oculus Rift. The new Touch controllers offer a highly immersive virtual reality experience that you just can’t get with the standard Xbox One controller that comes already bundled with the Rift. Using Touch truly enhances the experience in such a way, that you feel you are finally using the Rift as it was meant to be experienced.

At $200, the Touch controllers are on the pricey side, but it delivers as a major step forward in VR hardware, that offers an entirely new and natural way of interacting in the virtual world. With Oculus Touch, the magic of hand presence has finally become a reality on the Oculus Platform.