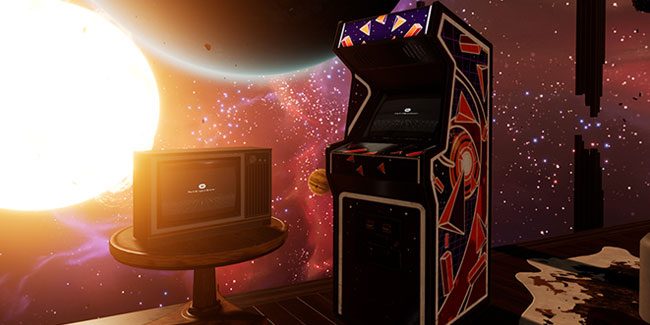 Oculus has announced that its latest update of the Rift software, version 1.27, has started rolling out to users on the platform, bringing a number of new and exciting features to Oculus Home.

As part of the new update, users now have the ability to embed Dash panels within new Home items that feature a display screen. This means that any traditional application, like playing a non-VR game or streaming a video that users could previously watch with Oculus Desktop, can now be enjoyed on a virtual computer monitor or TV right from inside the comfort of their Home environment. Oculus is also introducing some other ‘Special items’ in the Home inventory that users can unlock to embed Dash panels—such as a retro TV set and Vortex arcade cabinet.

In addition, Oculus has added support for importing user-generated content to Oculus Home, allowing users to showcase their favorite 3D sculptures and help to completely change the look and decor of their Home.

Users can import 3D assets simply by dropping .glb files, which is the binary version of the gITF 2.0 file format, into the Oculus Home imports folder in your Documents directory and then place them into your Home. Full step-by-step instructions on importing models can be read here. Oculus also says they plan to release an update to its VR sculpting tool, Oculus Medium, later this month that will allow users to export their own 3D models directly into Home.

Along with Oculus’ Home update announcement, the company revealed details into CTO John Carmack’s new technique for video encoding that can enable developers to significantly boost the level of quality and visual fidelity of existing high-quality 360° content. To learn about Carmack’s new VR playback technology, which was used in the recent 5K re-release of Henry, check out Oculus’ latest developer blog post for more in-depth details.

Oculus ‘Summer Sale’ Event Offers Discounts Up to 75% Off