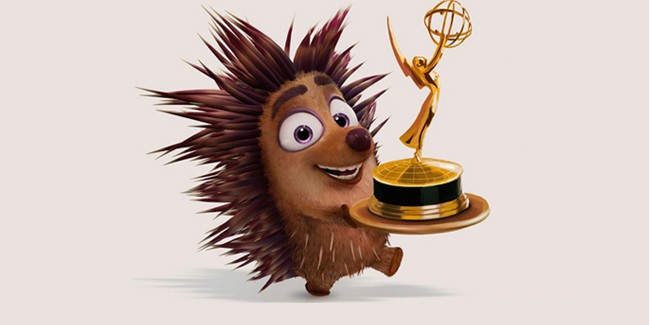 For the first time, Oculus is now among the prestigious list of winners of an Emmy award. Its highly-praised animated VR short film, Henry, created by the company’s in-house cinema division, Oculus Story Studios, won an Emmy for Outstanding Original Interactive Program.

Henry is a heartwarming animated tale about a lovable hedgehog that loves to hug and just wants to make friends, however, his prickly spines scare everyone away. The film is directed by Ramiro Lopez Dau, known for his previous work on Pixar’s Brave and Monsters University, and is narrated by Elijah Wood.

In a statement on the announcement Ramiro Lopez Dau said, “When we set out to make Henry, it was a step into the unknown world of making an emotional VR movie. While we didn’t know what the outcome was going to be, we were excited about the possibilities. We never anticipated that one of our first projects would be given such a distinction and this recognition is not only a testament to our team’s creative and technical achievements, but also a validation for the VR storytelling community as a whole. While Henry is just one step in the long journey ahead, we hope this moment inspires storytellers to bring their ideas to this new medium and help shape the future of VR storytelling.”

While this Emmy is a significant milestone for Oculus, it’s actually not the only VR project to receive the award. Last year, The Sleepy Hollow Virtual Reality Experience, developed by Secret Location, won an Emmy for User Experience and Visual Design, as well as Taylor Swift’s 360-degree music video Blank Space, which was the previous recipient of the Emmy award that Henry won this year—however, Henry is the first VR original narrative movie to ever receive the honor.

It’s clear that virtual reality is attracting the attention of Hollywood in a big way. The use of VR as a tool for storytellers to create a powerful and emotional connection with viewers is unlike any other medium. And although virtual reality is still in the early stages, there is no question about how far its come and the impact it will continue to have as new innovations and techniques emerge over time.

Currently, Oculus Story Studio is working on its next VR film project, Dear Angelica, which it revealed earlier this year at the Sundance 2016 film festival. The studio says it plans to release more details on the project later this year.