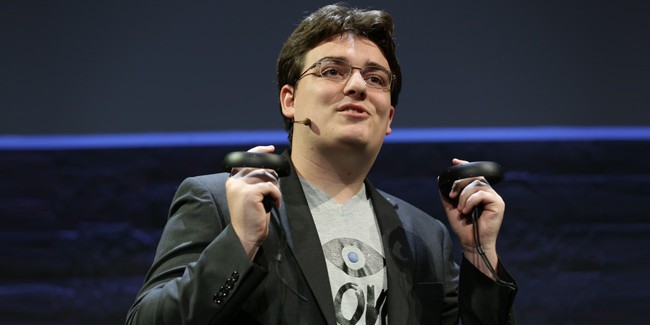 Oculus founder Palmer Luckey—who has remained out of the public spotlight since the revelation that he had funded a polarized political campaign came to light—emerged in a Dallas federal courtroom yesterday to testify against the $2 billion lawsuit brought against Oculus by ZeniMax Media.

At the center of the lawsuit is John Carmack, an iconic programmer and co-founder of ZeniMax’s subsidiary id Software. Carmack, now chief technology officer at Oculus, demoed an early prototype version of the Oculus Rift headset at the E3 convention in Los Angeles back in 2012 while he was still working at id. At the time, Luckey’s prototype was running id Software’s Doom 3: BFG Edition in VR. According to a report from UploadVR, when asked whether the 2012 demo was a breakthrough moment for the company, Luckey replied, “I guess you could call it a breakthrough moment in awareness.”

When further questioned whether Carmack’s technical expertise contributed to the Rift, particularly when it came to the Rift’s barrel distortion technology, Luckey stated, “I guess what he did is ‘a’ solution rather than ‘the’ solution.”

During his testimony in court, Luckey denied the claims that he had violated a non-disclosure agreement he signed with ZeniMax after the E3 convention that would have prohibited him from sharing proprietary secrets about how the device works. Luckey said the showing of the demo relied only on “executable code” that did not reveal the underlying proprietary source code.

“I didn’t take confidential code,” Luckey said, according to Bloomberg. “I ran it and demonstrated it through the headset. It is not true I took the code.”

While ZeniMax’s attorney indicated that Doom 3: BFG Edition demo and Rage VR testbed were both subject to the NDA, the defense countered those claims saying that the software entered public knowledge, which as a result negates that part of the NDA.

ZeniMax’s legal team attempted to build around the idea that Luckey, who was home-schooled and lacked a college degree, could not have the technical ability to create the Rift on his own and that the origin story behind the Rift’s creation in his parents’ garage was just some made up fabrication.

The defense refuted these claims and worked through proving how Luckey’s long interest in engineering and electronics tinkering began at a young age. At one point, the defense cited Luckey’s childhood subscription to a magazine called Nuts & Volts, which led him to begin researching heavily into virtual reality and eventually build his first VR prototype headset in August 2010.

Brendan Iribe, who recently stepped down as Oculus CEO to head the PC VR division of the company, also took the stand to answer questions concerning his relationship with Luckey and early talks between Oculus and ZeniMax—in which Oculus was willing to offer ZeniMax a 2% equity stake in the company to allow then-id Software John Carmack to work as a technical advisor role at Oculus. ZeniMax, however, countered the offer and instead proposed that it get a 15 percent equity stake, which Iribe found to be completely unreasonable.

The questioning went on to continue into the specific details about the Oculus software, in which Iribe adamantly asserted that no line of code or any technology from ZeniMax found its way into the Oculus Rift.

Last week, Carmack also took to the stand and while he acknowledged in his testimony that he did copy files containing work he did at ZeniMax before he left to join Oculus as CTO, he firmly denies using any of that code in his work for Oculus. Instead, Carmack says he rewrote the code used in the Oculus Rift completely from scratch and, in fact, that the original ZeniMax code he’d written would not be compatible to work in Oculus headsets.

Facebook CEO Mark Zuckerberg also testified earlier this week, saying “we are highly confident that Oculus products are built on Oculus technology.” The trial is expected to continue for another two weeks before the jury decides the outcome of the case.