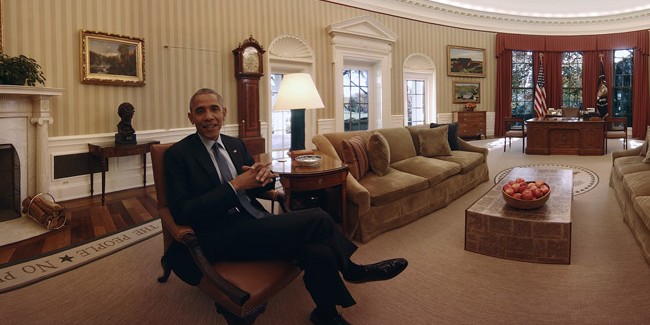 Earlier this year, Felix & Paul and Oculus Studios released “The People’s House,” a 360-degree guided tour of inside the White House featuring the former U.S. President Barack Obama and former First Lady Michelle Obama. Now, in recognition of its innovative work, the studio has been awarded an Emmy for ‘Outstanding Original Interactive Program’.

The People’s House: Inside the White House with Barack and Michelle Obama beat out two other VR films that were nominated in the same category—Oculus Story Studios’ Dear Angelica and Oculus/Magnopus’ Mission: ISS.

“The strength of this year’s nominees is impressive and an inspiration for the future of interactive storytelling in VR,” wrote Oculus in a blog post. “We’re amazed by the creativity and innovation on display—not just at the Emmys, but throughout the entire VR content ecosystem. The medium continues to grow and evolve at a rapid pace, and we’re excited by the momentum of the industry as a whole.”

Felix & Paul’s Emmy award-winning video is available for download on both the Oculus Rift and Samsung’s Gear VR. Currently, the studio has over 35 virtual reality experiences under development and will be announcing its next VR projects at Oculus Connect 4 this October.