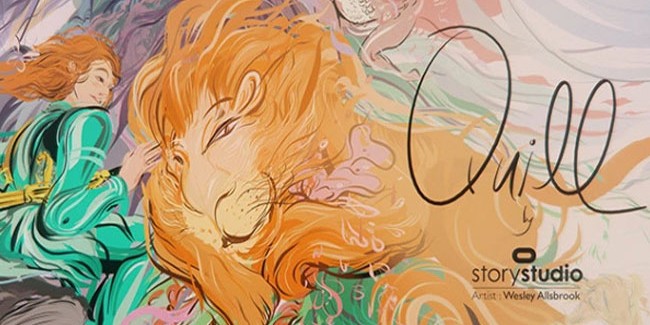 Oculus announced today that it will release a beta version of its upcoming VR illustration application, Quill, for free on December 6th alongside the launch of its highly-anticipated Oculus Touch motion controllers for the Rift.

Quill was originally developed in-house as a custom production tool for Oculus Art Director Wesley Allsbrook to create and shape the artistic vision for the Oculus Story Studio original film Dear Angelica, which was first previewed at the Sundance Film Festival earlier this year.

With a powerful tool like Quill, users are able to tap into their imagination to create unique artwork from simplistic doodles to sophisticated storytelling masterpieces in VR utilizing a pair of Oculus Touch controllers. Quill gives the artists complete freedom from the traditional flat canvas of pen and paper and allows them to express their creativity directly in the virtual world.

By releasing its free tool to the public, Oculus hopes that Quill will help spark a new form of artistic creativity and expression: “Pioneering of any kind – but especially in VR – won’t happen through a few individuals alone – it requires a movement. That’s why we’re excited to share Quill with artists around the world and discover how other creative minds will use it.”

Quill joins Oculus’ growing lineup of creation tool applications such as Oculus Medium, which allows users to sculpt and model solid-feeling objects in a VR environment.

The free beta of Quill will be available for free on December 6th alongside the launch of the new $199 Touch motion controllers.