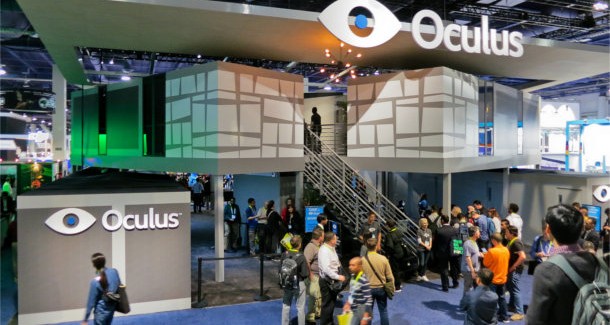 Next week, the annual Consumer Electronics Show in Las Vegas will open its doors to the public, and it will be the first time Oculus has an open booth available to all attendees at the event to show off some of its latest tech.

However, nothing quite prepared anyone for the two-story booth Oculus set up at CES 2015. The booth is massive, and a departure from the small, private booth setting held by Oculus’ at CES last year. It seems as though Oculus is making a statement in a big way, and they have not only the technology, but also the financial backing to do it since being acquired by Facebook.

Reddit user ThisIsMyRedditNameOK showed an early access peak of Oculus VR’s booth while it was still under construction on CES show floor.

All of this is making people wonder what Oculus is going to fill roughly 3,000 square feet of display space with. However, the company did put out a recent tweet about the upcoming show suggesting we can expect the Crescent Bay prototype to make an appearance, which debuted at the 2014 Oculus’ Connect conference in September. Also, mentioned in the tweet is the Gear VR, which Oculus collaborated with Samsung to deliver a mobile VR experience.

No matter how you look at it, the two-story Oculus Rift booth at CES 2015 is a power play in the field. It is saying nothing less than “everyone is watching me,” And we are, and we are waiting to see just what Oculus will bring to the table for consumers next year.

Oculus Is Working on VR Controller for the Oculus Rift