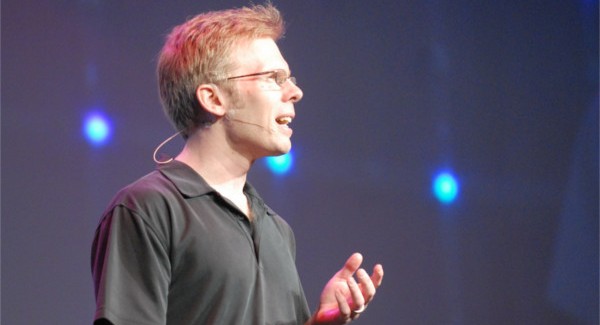 A little more than a month after the announcement of Facebook’s acquisition of Oculus VR for $2 billion sent shock waves throughout the gaming industry, it appears Oculus VR and the social media giant could soon find themselves in court defending over the rights to the Oculus Rift technology.

According to a report by The Wall Street Journal, ZeniMax Media, the parent company of both Bethesda Softworks and id Software sent formal legal documents to Oculus VR and Facebook’s lawyers claiming that former employee, John Carmack, “improperly took ZeniMax’s intellectual property with him to Oculus,” and goes on to say, “it was only through the concerted efforts of Mr. Carmack, using technology developed over many years at, and owned by, ZeniMax, that [Oculus founder] Mr. Luckey was able to transform his garage-based pipe dream into a working reality.”

Carmack, legendary game developer best known for co-creating games like Doom, Quake, and Wolfenstein 3D, joined Oculus VR in August 2013 as the company’s chief technical officer while still maintaining his position at id Software, which he co-founded in 1991 before formally departing in November of last year.

In a statement issued by a ZeniMax spokesperson:

“ZeniMax confirms it recently sent formal notice of its legal rights to Oculus concerning its ownership of key technology used by Oculus to develop and market the Oculus Rift. ZeniMax’s technology may not be licensed, transferred or sold without ZeniMax Media’s approval. ZeniMax’s intellectual property rights arise by reason of extensive VR research and development works done over a number of years by John Carmack while a ZeniMax employee, and others. ZeniMax provided necessary VR technology and other valuable assistance to Palmer Luckey and other Oculus employees in 2012 and 2013 to make the Oculus Rift a viable VR product, superior to other VR market offerings.

The proprietary technology and know-how Mr. Carmack developed when he was a ZeniMax employee, and used by Oculus, are owned by ZeniMax. Well before the Facebook transaction was announced, Mr. Luckey acknowledged in writing ZeniMax’s legal ownership of this intellectual property. It was further agreed that Mr. Luckey would not disclose this technology to third persons without approval. Oculus has used and exploited ZeniMax’s technology and intellectual property without authorization, compensation, or credit to ZeniMax. ZeniMax and Oculus previously attempted to reach an agreement whereby ZeniMax would be compensated for its intellectual property through equity ownership in Oculus but were unable to reach a satisfactory resolution. ZeniMax believes it is necessary to address these matters now and will take the necessary action to protect its interests.”

Update: Carmack took to Twitter to express his opinion against the claims stating his work at ZeniMax was not patented, and no code he wrote while employed by ZeniMax is being used for the Oculus Rift.

Oculus uses zero lines of code that I wrote while under contract to Zenimax.

No work I have ever done has been patented. Zenimax owns the code that I wrote, but they don't own VR.

So, what does this all come down to? Well, simply—Money. ZeniMax is attempting to be compensated for rights to part of the virtual reality technology that it believes Carmark developed and took with him to Oculus VR to help make the Oculus Rift successful while still an employee at id Software.

Further, ZeniMax’s claim of Oculus VR founder Palmer Luckey acknowledging in writing the legal ownership of certain intellectual property belonging to ZeniMax only adds fuel to the fire, as these events unfold into a possible legal battle for financial compensation.

Oculus VR issued a response denying ZeniMax’s claims stating, “It’s unfortunate, but when there’s this type of transaction, people come out of the woodwork with ridiculous and absurd claims. We intend to vigorously defend Oculus and its investors to the fullest extent.”

Stay tuned for more updates, as this developing story unfolds.

Oculus VR Responds to ZeniMax Allegations: The Claims are ‘False’